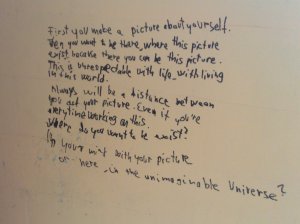 I stumbled across this piece of wisdom, scrawled on the wall of a hostel’s toilet by a traveler with a knack for philosophy, during my break from Manuel Castells and Alain Touraine[1]. As a person who happens to despise motivational speakers, inspirational quotes, or popular leadership figures, I found wisdom through random moments in life (or fantasy books) and was immediately moved by this particular one. As I took a sip of my piping hot mint tea, scenes of my encounters with a traveler’s unwitting wisdom flashed through my mind.

The first was of a winter evening in Lisbon.

We were lounging in a pool of warm water sprinkled with salt from the Dead Sea, the last out of the four series of a hydro-treatment in a spa we found through the tourist office. I have shared the wonders of Porto and Lisbon before, but I did not tell you that the trip involved: a) 12 people, b) a stupid GPS that almost led us to Spain while searching for our hostel, c) non-stop pouring rain, d) an encounter with the police, and e) a near-death experience. So after a particularly long and difficult day, we decided to spend a small fortune and regain our sanity. ‘We’ were classmates who bonded over being hyperactive, just spent four days only being separated by bathroom breaks, and found that we actually loved each other’s company instead of wanting to shoot each other in the head. She was telling me about her crazy backpacking adventures and said, “You know how they say that you leave a little piece of you when you go somewhere? For me, traveling allows me to find myself and I collect a little piece of myself every time I go somewhere.”

She was right, even though I did not know it at the time. I started to find a little piece of myself in Portugal, a piece that appreciates the art of hostels and is fond of Port wine. I collected an adventurous and life-loving piece in Sicily, where I felt reborn after going through a few very difficult months, and a calmer, more mature piece in Rome, where I learned the art of accepting things I could not change. The same goes for Bangalore, where I made perhaps one of the biggest decisions in my life, and Taipei, where I found that deep down inside I belong to my cultural heritage.

The second was of a spring night in Rome.

We were sitting on a bench in a piazza, staring at a little girl dancing to the jazz tunes played by street musicians under a full moon. ‘We’ were two completely different people from completely different countries who met in Sicily for two days, liked each other enough to actually become friends, and did not find any problems in keeping the conversation flowing. In between talking about storybook moments and finding refuge in Europe, I confided that I was having the time of my life and dreading the moment it would end. Very calmly, he said, “Isn’t it very sad to think that we only have a time of our lives? I would like to think that we have many times of our lives and that this is only one of yours.”

He was right, and I already knew it at that time. As far as my 26 years of life goes, the past year has indeed been the most incredible. But then again, during those 26 years things got progressively better each year and so does my time here, an indication that life will continue to be more exciting as long as I want it to be. I just need to be reminded by a 20 year old who was wise beyond his years.

I guess traveling does unleash the inner philosopher in people. This is one of the reasons why I love it so much that even a bed-bug incident in Rome would not deter me from traveling again. A bigger reason though, is that it allows me to really meet awesome people that leave their marks in my life. After the spa session in Portugal, she became one of those people I could not imagine living without and her wedding was the first that I actually cried in. After the piazza in Rome, he took me to this great club where I ended the night with a red rose from a drug dealer and, well, pretty much sealed that I will not forget him for the rest of my life.

[1] Yes, Dusty fellows, I have a very good reason behind my long overdue post: I am writing my thesis. Thank you, Twosocks, for holding down the fort. I will try to write short, simple posts more often, but if I fail to do so, I will be back in November with a vengeance!