After four months living in a completely flat country, we were a bit out of breath after bravely neglecting the quaint antique yellow trams and climbing all the way up to the highest hill in Lisbon. We passed through bright colored casas with colorful laundry hanging on the balcony, orange trees growing in between the stone cobbles, tall white cathedrals with intricate sculptures, and finally reached at our destination: Castelo de Sao Jorge. Or St. George’s Castle, for the non-Portuguese tongue. 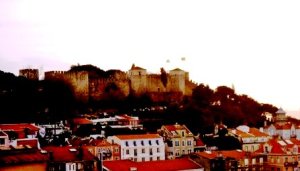 The Castle, and I intentionally put a capital C to denote just how important this particular castle is for me, was the landmark of Portugal and boasts a spectacular view of Lisbon. More than that, it was the first castle I have ever entered (despite having been to a castle’s courtyard in Bratislava), although to me it looks more like a fort than a real fairy tale castle. Even more than that, it was the setting for one of my favourite children adventure stories of all time: The Mysterious Benedict Society and the Perilous Journey. My very, very wonderful friend Ron understood the significance of all this and was extremely excited when I told her I was going to Portugal. With bright sparkling eyes she said, “Go and live the fantasy for me!”

The four extremely talented children in the book were in mission to find their beloved friend Mr. Benedict, who was captured by his evil twin Mr. Curtain, and had to find a clue to his whereabouts in the Castle. The location of the clue was presented in a riddle, which I knew by heart but won’t recite here because obviously those I went there with already thought I was helplessly geeky as they read this piece. Well, anyway, I sought to follow the clue like the children did, so instead of directly finding the site I took my time and enjoyed the Castle. 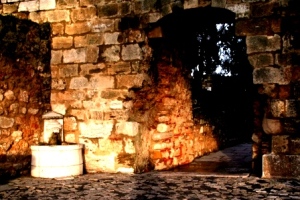 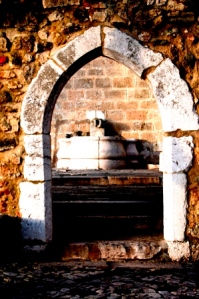 The Castle’s courtyard resembles a charming park, with olive, pine and cork trees growing through the cracks of cobblestones covering the castle ground. Peafowls -cocks and hens, young and old-  perched on the castle wall or nonchalantly sauntered around the bridge leading to the entrance to the fort-like Castle remnants while carefully staying away from the lazy sunbathing plump tabby cats.

The Curly Hippie and I went into the Castle, which again, looked more like a fort than a castle. It was all open air and in the middle of it was an inner courtyard, with stairs to allow us to walk through the tiny paths around the four corners. At the highest point, we were almost as tall as the swaying Portugal flag and felt like royalty looking at the sparkly Rio Tejo (or the Tajus river for us non Portuguese) beyond the red and white roof tiles. 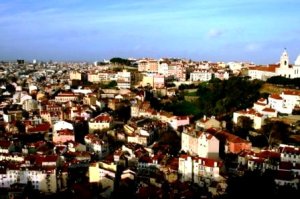 While The Curly Hippie snapped tons of artistic pictures, I put on my fedora and opened my coat buttons so that the wind flapped it around my body and imagined being a (female) war general who bravely challenging any enemies to harm her beloved kingdom. Some of the towers had windows that reminded me of Rapunzel, if only my hair was as long as hers I would have totally lowered down my hair and see whether any prince would climb it.

As we descended, I decided that it was time to return to the Mysterious Benedict Society and follow the riddle. I went back to the front courtyard, looked at the sun, and went to the westernmost wall. A row of cannons greeted me and I went to the nearest one, the furthest away from any cork or pine tree. I kneeled down and touched the base of the cannon; that was where the children would have found the next clue to Mr. Benedict’s whereabouts!

The answer to the riddle!

I stood behind the cannon and stared at the magnificent view of Lisbon below me, all the while basking in this weird, great feeling that enveloped me: the feeling of living in a fantasy book! Now I wonder, what would it feel like to go to King’s Cross and live out Harry Potter?

P.S: I also had a more grown up Portugal adventure in Porto!