The tropical travelers left Bratislava with high spirits, ready to be awed by the majestic Vienna and each with his and her own idea. The Octopus loves pop art and would like to see the works of Hundertwasser, Vienna’s quirky architect. The Mean Girl, a Germanophilia, couldn’t wait to have German words caress her ears. The Human GPS wanted to be caressed as well, but by German pork wursts. I think Kittybangbang was looking forward to the palaces. I, on the other hand, had one very specific idea in mind.

I wanted to taste the original Sacher torte.

Austria is also famous worldwide for its strudel and schnitzel, but only the torte has traceable origins. This chocolate cake was invented in 1832 Vienna by Franz Sacher, the owner of the Sacher hotel and café that are still standing until today. Going to Vienna means that I would be able to taste the original Sacher torte, one of the world’s best chocolate cakes, based on its inventor’s original recipe in its very place of birth.  For a chocolate connoisseur like moi, the only experience that can top this is meeting the Oompa Loompas of Willy Wonka’s chocolate factory – but unfortunately they are fictional characters. I could just imagine savouring a slice of the torte bit by bit, with a cup of marille tea beside my plate and the waltz playing in the background.

A box of Sacher torte

We went to Hotel Sacher on our very first day in Vienna in pursuit of the torte fantasy, but unfortunately December was a very popular month and the café had a waiting list for at least two hours. The only option left was to purchase a cake from the adjacent shop, so my tropical traveler comrades kindly agreed to chip in and we bought a small whole torte to go, which came in a prettily wrapped wooden box. The Human GPS nicely volunteered to carry the cake in his backpack with paper napkins and a silver knife from the kitchen of our gracious host. We only had to find a breathtaking Viennese landmark to be the perfect backdrop for the Sacher experience. The fantasy was growing bigger and better!

Unfortunately, it was not that easy to find the right site for the Sacher experience. Not that the places we visited were not brilliant enough, but something always got in the way.

The Schonbrunn Schloss, Vienna’s summer palace, was so majestic even in winter that I no longer feel that impressed by Versailles. The palace had a hill with a zoo, winding mazes, a pond, and a grand version of a gazebo on its backyard! The beauty of Schonbrunn its understated elegance, you could feel that you were standing amongst the blue bloods used to magnificence, There was a frozen pond on top of the hill, which would look great on camera if we devoured the Sacher then and there while looking at the palace and maze below. Alas, the days of winter were short and the sun was setting already. So the Sacher stayed untouched. 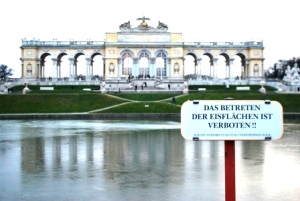 Or perhaps the Schonbrunn backyard?

Learning from the Schonbrunn experience, we came earlier to the baroque Belvedere palace the next day. The winter palace was not as awe-inspiring as Schonbrunn, but it did have a lovely garden embellished with homoerotic statues and statuettes that would be more impressive in any other season. We were not that picky though; we were about to unwrap the torte box and settle in one of the benches when we realized that sinister looking crows were perching by the dozens in the barren trees. I loved gothic vibes, but it was not the right mood for indulging in chocolate cake. Again, the Sacher remained intact.

If only there were no crows!

After being mesmerized by the majestic architectures of Viennese royalty, our next stop was the Hundertwasser Haus, the more contemporary architectural icon of Vienna. The Haus was five stories tall and had yellow, blue, dusty pink, white, and grey paints. The floors looked uneven and it was not a trick for the eye, they were really made uneven. Trees grew outside, inside, and above the Haus, which apparently was really inhabited by real people despite of being whimsical enough to be the Mad Hatter’s house! Hundertwasser was Austria’s most renowned artist and architect and rightfully so, I believe, since his surrealist touch even made the Spittelau’s district heating plant became quirky and looked like Willy Wonka’s chocolate factory. Speaking of chocolate, the Sacher experience was yet to be had, for the popularity of the Haus left no space for us to sit and eat.

These delays to the Sacher experience were frustrating for me, but they actually posed a threat for The Human GPS. We were excited to visit the United Nations headquarter and roamed its insides, an opportunity granted by our diplomat host, but when we were about to enter the gates we were reminded of the extensive security procedure we had to go through… and of the knife in the backpack! Imagine, had we forgotten, the Human GPS could have been arrested then and there for carrying a weapon to the U.N.! So we took out the knife and hid it amidst the shrubberies not too far from the gates and only then put on our best tourist face and went in. 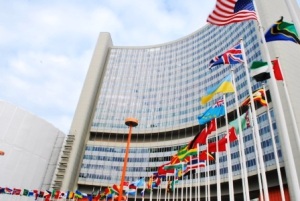 Perfect spot #4: Before the flags at the U.N. headquarter

I started to think that we might have to have the Sacher experience in Prague, but our lovely guide the Spittelau Princess came to the rescue and took us to the Vienna Stadtpark to see the Johann Strauss statue. The winter sun was at its brightest when we arrived, creating sparkles in the duck pond and warming our faces. With the grass and the flowers, the gazebo and the sun clock, it almost looked like spring. Finally, the perfect spot.

We settled on the bench and took off our gloves, bracing the biting wind for this experience. Unwrapping the box was fun, but it was even more fun to find a perfectly smooth, round, dark chocolate torte nestled inside the artistically penned wooden box amidst a paper haystack. The cake was cut into small pieces and we at long last scooped the slice into our mouth!

The cake was spongy, with a biscuit base, apricot filling, and gingery dark chocolate coating. It felt wonderful to sink your teeth into it and felt the coating melt in your mouth. Truth be told, it was not the best chocolate cake I’ve had my entire life. The sponge was quite dry and later on I found that the torte is supposed to be accompanied by a dollop of whip cream to moisten it. But still, the gingery taste and apricot filling were exquisite. It may not rank first on my list, but it is among the top ten. And having it under the winter sun, in a park bench with great friends, looking at ducks swimming and next to the statue of a famous composer made the Sacher experience my absolute highlight in Vienna!

The witness to our Sacher moment: Johan Strauss