If you were asked to select a soundtrack for Jakarta, most likely you would choose a tune that best captures the city’s strongest image for you. For political activists, it may be the folksy rhythm of Iwan Fals or the hippie rock of Slank – both sharp with social criticisms. For those who hailed from Javanese villages and are frustrated with Jakarta’s traffic, it may be the late Mbah Surip’s Tak Gendong.

But what I realized very recently is that if you put the question in reverse, Jakarta will surprise you. Select the music of your choice and seek for it in Jakarta, then the city will reveal one of its million faces that you’ve never seen before.

I am generally put off by concerts or live music performances in Jakarta. The Dahsyats and the Inboxs are aggravating, the Java Jazzes and foreign artists’ showcases too expensive, and the Monas and Ancol concerts are overcrowded and outright scary. I should have known that Jakarta, the city of wonders, has something for me hidden in one of its nooks and crannies  – but not until I got addicted to the band SORE and craved to see them perform live that I found it.

The journey started with facebook, where a friend informed me of SORE’s fan page. From the page I discovered that the band will perform in an event called RAME RAMERAH on the 16th of August at a place called Kandank Jurank Doank (KJD) with a book donation as its entrance fee.

So, on the D-day, armed with used books and after spending an hour with our nice taxi driver, Twosocks and I arrived at the venue. And we were amazed.

For starters, KJD is not an abandoned field used for mosh pits or punk concerts. It’s where Dik Doank, an Indonesian artist with a vision, hosts its Sekolah Alam. It’s a lush, large complex that features art studios, library, an outbound site, basketball and soccer fields, a warung lesehan, and a gamelan and wayang stage. Loud pop colours mix with traditional wooden architecture and greeneries. It’s a destination in itself!

The concert took place in SLINK (Setengah Lingkaran or Half Circle), a semi coliseum stone stage arena with rice fields as its backdrop. We sat there, basked in the warm glow of the afternoon sun and the beauty of the scenery so rarely found in Jakarta. As the event kicked off, we were promised that we will be a part of something special. It was a collaboration between KJD  and Aksara Records, an independent record company, combining live performances with workshops on various themes (film scoring, photography, and so on) by the bands under its label. 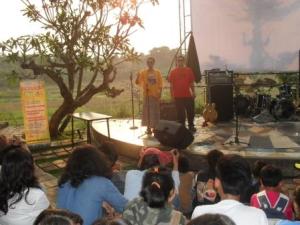 Dik Doank kicked off the event

And it turned out to be special indeed.

It was not just because of the music, although the bands were brilliant. I came for SORE but then fell in love with White Shoes and the Couples Company’s showmanship. Twosocks ended up buying a CD of The Adams. We jumped around with The Brandals and tried our best to comprehend the beat of Goodnight Electric. 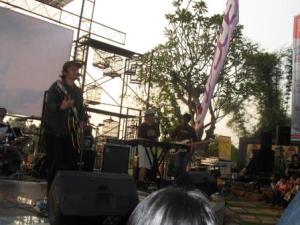 A soiree with SORE 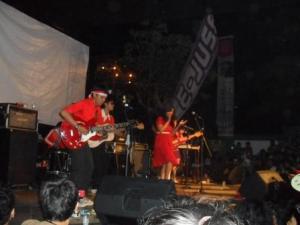 The adorable White Shoes and the Couples Company

It was the sense of community that made it so special.

Unlike the homogenous masses in other concerts, the crowd that gathered here was a mix of the cool peeps of Jakarta, kids and teenagers who are students or volunteers of KJD, and people from all ages living in the small suburban neighbourhood: the grannies, the dads and the moms, the uncles and aunties. And what do you know – you might be sitting next to the musicians themselves, who also enjoyed their comrades’ performances before or after their turns to grace the stage. They sat there, singing along, without hysterical screams of groupies or flashes of camera, just like the rest of us who were there for the music.

As anywhere else, wacky MCs talked their mouth off to entertain us in between performances. In this case, they are David Tarigan (the co-founder of Aksara Records) and Aldo Sianturi (its managing operation). In this case, they yakked for almost 12 hours – sometimes saying funny gibberish, mostly articulating what it means to be independent as a nation and in making music. They also introduced a new band called Pasukan Lima Jari and asked the audience to grade its performance, as a way to provide feedback to an aspiring musician. Where else can you find top recording company execs do this?

Here was my kind of music, my kind of concert: spirited, idealistic, friendly, egalitarian, inexpensive, and most of all, memorable. I never guessed that I will discover this just by impulsively following a facebook announcement to feed my addiction.

See? Jakarta is a Pandora box of surprises. Follow your tune, and perhaps an exciting adventure will be revealed to you.