We just received an invitation from Vira to speak at Sua Pelancong, an intimate gathering to share travel stories organized by and for travel enthusiasts. We were ecstatic, of course. We’ve heard about Sua Pelancong for a while and have been following the live tweets and blog recaps of past editions, so of course we were excited to be invited to the sixth volume of their gathering. But we were also confused. The theme of Sua Pelancong Volume 6 is travel and music, and we were not quite sure what story we could tell.

It’s not that we were aliens who shrivel at the sound of music – I could never write an essay without listening to Kings of Convenience, Twosocks felt most ready for his morning run after a dose of songs from Rocky’s training montage, and one of our favorite routines to welcome the weekend is to sip tea and munch on toast while listening to Edith Piaf and Frank Sinatra. But they are every day mundane moments, not fantastic travel and music stories worthy of sharing.

“Wait, instead of focusing on what to talk about, what about focusing on how we are going to talk about travel and music?” Twosocks eyes were impossibly large at this point. “What if we do a spoken word performance?”

I was intrigued. How could I not? We’ve been smitten with spoken word ever since we saw our friend, the poet Khairani Barokka brought it on stage to Jakarta two years ago. Never before we saw poetry performed in such a light, heartfelt, and relatable manner. We laughed to tears watching Beau Sia confront the stereotypes around Asians in the U.S., beamed when Gill Sotu recounted his teenage love experience, and rendered speechless as Mayda del Valle performed before Obama in the White House. We have always wanted to give it a try, but we never dared to. Until now.

We huddled over a cup of tea, cardamom masala this time to celebrate my trip to India the following day, and came up with a skeleton for our music and travel story. We decided to select two most memorable music-related moments from our individual travels – watching Evita on Broadway for Twosocks and a chance encounter with a street musician in Barcelona for me – and break up sections for each of us to write while I’m away for two weeks on my trip. We would only have one day to finalize the poetry and practice performing, but hey, that was part of the thrill!

Two weeks after the cardamom masala induced brainstorm, we arrived at Sua Pelancong’s venue at Never Been Better, Kemang. My heart thumped loudly over my orange dress and I could tell that Twosocks was full of jitters too, but all the nervous bug evaporated the moment the first speaker stood up. We were lost in stories of travel and music.

They talked about music and travel as an inspiration to create. The first speaker in Sua Pelancong, Avo, is a beatboxer, a lecturer, and a filmmaker with an infectious smile and an overabundance of energy. He shot a music video for his singer/songwriter friend during their vacation to Solo, took a spontaneous clip of him beatboxing with two kecak dancers after watching their performance in Bali, and is in the process of finalizing his documentary on the Indonesian Beatboxing Community’s efforts to learn about kecak in Ubud, Bali. We really can’t wait for the full release of his Project Chant!

They talked about music and travel as an introduction to and preservation of indigenous cultures. The second speaker was the Menuju Timur duo, Aria and Intan, who love exploring Eastern Indonesia and taking other people along with them. Aria and Intan showed us videos of traditional dances and music in Flores and Manggarai, sharing that they often arrange for such performances when travelers come with them to those areas. The youth in some villages, they said, would initially only watch from a distance when such performance take place. They were embarrassed, perhaps, thinking that the traditional music and dance are outdated. But as more travelers come along, more and more young people seem to be interested in their traditional art, up to the point where they learned and performed themselves.

They talked about the music that wouldn’t leave your head as you travel on. Fauzy, who happens to be one of the masterminds behind Kandura Keramik, only planned to transit in Liverpool before hiking in Snowdonia National Park. The Beatles could be seen all over Liverpool, since it is the band’s hometown, and the song Penny Lane got stuck in his mind for four days even when he was up in the mountains. 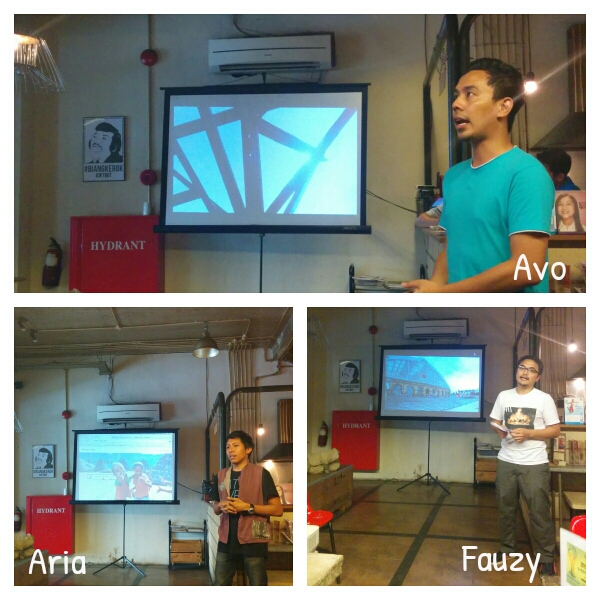 When our turn came, the jitterbugs came back. Twosocks was so nervous, he forgot his sandals when we stepped forward. I tried my best to run the lines we rehearsed only the morning before in my head, crossing my fingers that I wouldn’t forget. But then, we opened our mouths and started telling our story. A story about music as destination, music as something small that could snap you out of a bad moment on the road, and how music could take you to travel without moving at all. We talked about Evita on Broadway, of the guitarist on the Cataluna Art Museum, and of Diskopantera the Jakartan DJ who brought us back to the shoulder pads and primped hair of the 80s.

Bless the Sua Pelancong crew, they cheered for us. Us, spoken word greenhorns, who had no clue what to do with our hands and whose poetry still need an extra dose of rhythm. Intan asked us to perform at her and Aria’s record store’s Restock Party the day after and we said yes without hesitation, although the jitterbugs immediately came flocking back.

So there it was, the Sua Pelancong story. Our warmest thanks to Vira, Mumun, Vindhya, and Cindy for organizing the event and inviting us. We walked away with lovely stories, inspiring new friends, and an encouragement to be as playful and exploring as we wanted in telling travel stories, which are exactly what we hope to do through The Dusty Sneakers.

When we walked down Kemang Selatan, Twosocks reminded me that we did not have a title for our spoken word poetry.

“What We Talk about When We Talk about Music and Travel,” I answered without much thought. I looked at him, he nodded, and just like that, the title for our first spoken word was sealed.