Yes, you’ve guessed correctly. This note is indeed about a place in Aceh, in Sabang to be exact. Sabang has been thriving as a getaway destination since the tsunami, so much that the place looks and feels like the video clip of ‘I’m Yours’ by Jason Mraz: a laid back haven full of people from a cocktail of nationalities. It is of course all well and nice, but there are parts of Sabang that are so quiet and rich of stories that might escape most people’s attention. This post is about one such place, a petite island that is most often a day-trip hop for snorkelers staying in Iboih but deserves to be a place to stay in its own right: Pulau Rubiah.

It was very quiet when we arrived. There were only three immensely tanned foreigners sitting in the only eating shack in the island, where the caretaker family also lives. The island is so small, there is only one family living in there, the family of Bapak Yahya and Ibu Amansari. They greeted us warmly with lunch, the key to our cottage, and a bunch of messages wrapped in stories.

The local legend says that the island was originally created by the Gods as an escape for Lady Rubiah and her dogs from her evil husband. They took pity on her woes, so they graced the place with astonishing sea gardens, with corals and fishes of every colour swimming here and there. The Gods also created a hidden cove in the back of the island, where the sand is soft and wonderful to bathe in, for days when she chooses to have her head above water. But still, the evil husband must be kept away, so the Gods put a lot of sharks and sea urchins (or what Indonesians call bulu babi) to keep him at bay. That’s the first message: beware of the sea urchins, although the sharks are no longer here.

The beauty of Pulau Rubiah also attracted the Dutch colonialists in the 1800s, but the remote location and the sharks disqualified it from being a leisure site. They came up with another idea instead: making the entire island a mental ward. The beauty of the place is therapeutic, they argued, and the isolated setting will enable them to roam freely without hurting anyone. The ruins of the tall colonial asylum can still be seen until today, and that may also be the case with the patients’ ghosts. That’s message number two: if you’re bored with snorkeling and swimming, there are the ruins to see.

Fast forward a couple hundred years, the Dutch is gone but peace in Aceh was still a work in progress. When the Helsinki memorandum was signed in 2005, the whole world cheered. Two foreigners from the Aceh Monitoring Mission then decided to celebrate peace in Aceh by building a wooden cottage, the biggest one in the island, as an economic facilitation project for Bapak Yahya and Ibu Amansari’s family in Rubiah and the local community in the Iboih village, 10 minutes away by speedboat. The cottage is named Anak Peneudden and was finished in December 2006. It has been a place where joys were found and memories were made ever since, as those who stayed there testified in the guest book. That’s message number three: don’t forget to fill in the guest book! 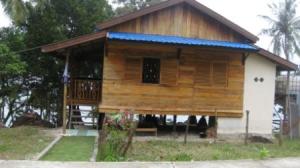 Resources are scarce in the tiny island of Rubiah, so the lights and electricity are only available in the cottages and restaurant from 6 to 12 PM. Wait, that wasn’t a story – just a plain, old, straightforward final message.

After those stories and messages, what else could we do but finish our meals quickly? There was so much for us to explore in Pulau Rubiah!